History of the Stockbridge Library

About Us » History of the Stockbridge Library

One of the earliest libraries in western Massachusetts was founded in Stockbridge.  In July 1789, 25 residents signed a charter forming the Berkshire Republican Library.  Original founders included a number of important figures from the town’s history: Theodore Sedgwick, Timothy Edwards, the Reverend Stephen West of the Congregational Church, and Erastus Sergeant, son of the missionary and the first physician in town.  In 1814, a library was established in Curtisville (now Interlaken) and a juvenile library containing about 160 volumes was founded in 1826.  From 1822 until 1861, little is known of the history of these libraries or the disposition of the books.

In 1862, Nathan Jackson (1780-1863), a Tyringham native and former student of the Stockbridge Academy, offered $2,000 toward a library in Stockbridge, provided that townspeople could raise an additional $1,000 and that a building would be erected to house the library.  Despite the Civil War, Stockbridge citizens responded by contributing another $2,500 and 400 people gave books.  The Stockbridge Library Association formed in 1862 to accept the gifts.

Mrs. Francis Fowler Dwight (1797-1886) gave the site – a corner lot at Elm and Main Streets – and  John Z. Goodrich (1804-1885) erected the stone building at his own expense.  In July 1864, a year after Nathan Jackson’s death, the Library opened its doors with 3,000 volumes on its shelves. It was one of only five libraries built in the United States during the Civil War.  According to bookplates of the era, the Library seems to have been known as the Stockbridge Social Library or the Jackson Library.  One-half of Jackson’s original gift was invested as a permanent fund for the purchase of books.

An upper room in the Library was originally for the use of the Congregational Church.  However, in 1902 the town appropriated $4,200 for alterations, and a skylight and a flat roof replaced the earlier silhouette.

In 1937, Mary V. Bement (1867-1944) gave funds for an addition to the Library as a memorial to her parents.  Her great-grandfather, Asa Bement, had been an early resident of Stockbridge and one of the founders of the Berkshire Republican Library.  The new Bement wing was designed to match the original Jackson Library.  The library building fund, part of which was a $10,000 bequest from Joseph Choate and part from Ellen King’s estate, was used for the lobby connecting the two wings.  An open house was held in February 1938 for the formal opening of the new Library, which included a spacious new reading room and a special area for residents and visitors to view documents and artifacts related to Stockbridge history.

However, the Library’s exterior now was comprised of one-third stone and two-thirds brick.  The problem was solved by an additional infusion of money by Mary Bement and the planning genius of Joseph Franz (1882-1959), who lived in the house behind the Library.  During 1940 and 1941, the skylight of the old Jackson wing was enclosed within a roof to match the addition, and the stone walls were sheathed in brick.

In the 1990s, the back gardens were redesigned to enhance both beauty and access.  The area housing the historical collection was renovated in 2003 to meet modern museum standards.

By 2010, our beloved Library was showing signs of age. A building code compliance study showed that antiquated mechanical systems should be replaced to make the building more energy efficient and to provide access for all visitors. Promising results from a 2013 financial feasibility study encouraged the Library’s Board of Trustees to move forward with a capital campaign to fund a major renovation.  That campaign ultimately raised over $4 million.

Renovation of the building began in October 2014 and was completed in April 2016.  About 2,500 square feet were added to the existing 10,300-square-foot structure without radically altering the footprint or the façade of the building. In addition to new mechanical systems, an elevator, and accessible restrooms, the renovation converted underused space on the Upper Level into new reading, study, and activity areas. The Museum & Archives – renamed the Procter Museum & Archives of Stockbridge History in honor of two major donors – enjoys expanded display and storage space and is now accessible to everyone.  The new Morris Stockbridge Room on the Museum Level is a multipurpose space for community programs, meetings, and activities.  New lighting and comfortable seating throughout the Library contribute to the welcoming atmosphere, as do the newly planted gardens that surround the building.

Public reception of the renovation has been positive, with increased patronage of both the Library and the Museum. The Library staff and Board of Trustees are dedicated to offering an expanding range of programming and other activities to continue the Library’s historic role as a community gathering place and center of learning for all Stockbridge residents and visitors.

The efforts and achievements of the Library’s many benefactors, board members, directors, and staff have been responsible for the positive progress of the organization throughout the years.  With the support of patrons and friends, the Stockbridge Library has been, and will continue to be, a true community treasure.

Common Tasks
Coming Inside the Library 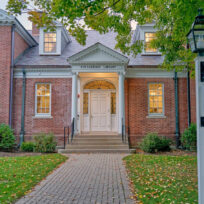 Come On In!
Virtual Services from Anywhere 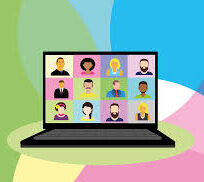