Learn more about the objects in the Museum & Archives Collections! 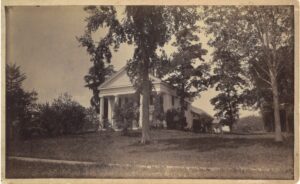 In the late 1790’s Daniel Fairchild, his wife Mary, and four children settled in the Curtisville section of Stockbridge. The Fairchild family became one of the more prominent families in Curtisville. In total Daniel and Mary would have 10 children, and Daniel would be one of the first Deacons for the “North Church” established in Curtisville.

Deacon Daniel Fairchild built his home and farmed the land that would eventually become part of Bonnie Brae and later the Stockbridge and DeSisto schools along Route 183. 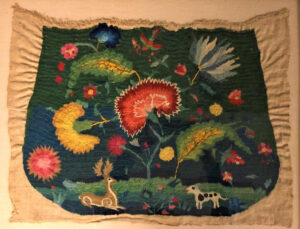 1750 embroidered seat cover by Elizabeth Williams West (1731-1804). She was the wife of Rev. Stephen West, daughter of Ephraim Williams and sister of Abigail Sergeant Dwight. 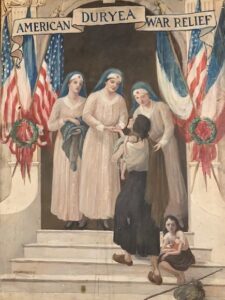 On the 11th day of the 11th month at the 11th hour the armistice was signed, and the Great War ended! The women of the Stockbridge Unit of the Council of National Defense worked through the war to raise money to assist the Duryea War Relief project, assist the Red Cross by winding bandages, educated townspeople about food rationing, and sent gifts to service members. 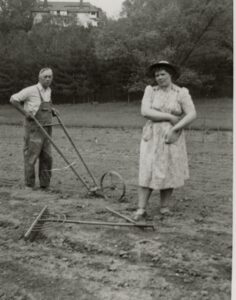 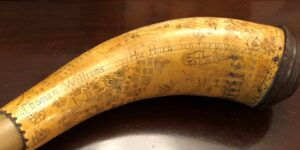 This powder horn that belonged to Thomas Williams is an excellent example of a Revolutionary War era artifact that depicts scrimshaw of a vicinity around Boston Harbor and Charlestown. Stockbridge Library, Museum & Archives Collection #72.203

The Owens Elm in Stockbridge 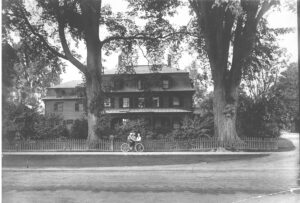 Several people with a bicycle leaning on a fence next to the Owens Elm on Main Street,  ca 1900. The tree was also known as the Edwards Elm.  Click here to learn more!
SLAHC Photography Collection # 95.543

Property at the corner of Main & South Streets 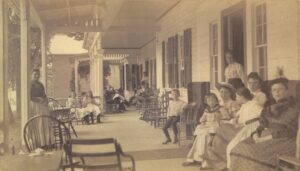 Property at the corner of Main & South streets has been owned/occupied by many over the past 200+ years, including Rhoda Quonpunwos, Bingham’s Tavern, Galpin’s, Pilling’s, the Stockbridge House and now the Red Lion Inn. SLAHC Photography Collection #94.110

A Stroll Through the Stockbridge Cemetery

The Museum & Archives Present:A Self-Guided Tour A town’s history can be told in many ways. One is a visit to the local cemetery. As you stroll along the paths…

Note: Due to the Covid-19 pandemic and the impending installation of a new HVAC (ventilation) system, the Museum & Archives is closed to the public. However, the archival collections are…

There are several ways you can help us improve our collection. Financial donations help us purchase the special materials needed to care for and house the historical collection as it…

Policies for using the Museum & Archives

Reference material relating to Stockbridge and its past. Biographies and family histories Books about the town and its institutions Maps and other references to properties in Stockbridge A study collection…