Join us for a Berkshire Chamber Players Concert! 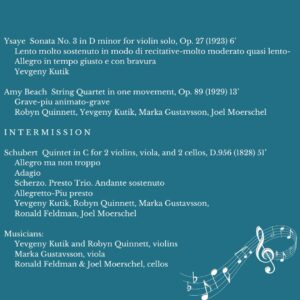 Yevgeny Kutik – With a “dark-hued tone and razor-sharp technique” (The New York Times), violinist Yevgeny Kutik has captivated audiences worldwide with an old-world sound that communicates a modern intellect. Praised for his technical precision and virtuosity, he is also lauded for his poetic and imaginative interpretations of both standard works and newly composed repertoire.

A native of Minsk, Belarus, Kutik began violin studies with his mother, Alla Zernitskaya, and immigrated to the US with his family at the age of five. An advocate for the Jewish Federations of North America, the organization that assisted his family in coming to the US, he regularly speaks and performs across the country to promote the assistance of refugees from around the world. Kutik’s discography, all on Marquis Classics, includes The Death of Juliet and Other Tales (2021), Meditations on Family (Marquis Classics 2019), Words Fail (2016), Music from the Suitcase (2014), and Sounds of Defiance (2012).

In 2021, Kutik made his debut with the Detroit Symphony Orchestra led by Leonard Slatkin, performing the world premiere of Schwantner’s Violin Concerto written specifically for Kutik. In 2019, he made his debuts at the Kennedy Center, presented by Washington Performing Arts, and at the Ravinia Festival. Kutik made his major orchestral debut in 2003 with Keith Lockhart and The Boston Pops as the First Prize recipient of the Boston Symphony Orchestra Young Artists Competition. In 2006, he was awarded the Salon de Virtuosi Grant as well as the Tanglewood Music Center Jules Reiner Violin Prize.

Kutik holds a bachelor’s degree from Boston University and a master’s degree from the New England Conservatory and currently resides in Boston. Kutik’s violin was crafted in Italy in 1915 by Stefano Scarampella.

Robyn Quinnett – Born on the island of Montserrat in the Caribbean, Robyn Quinnett began playing violin at eight years old. She has won several competitions including the National Mariam Hayes and Ruth Kern Competitions.
Robyn earned her bachelor’s and master’s degrees from The Juilliard School studying with Naoko Tanaka and the late Stephen Clapp. In 2019, Robyn completed her DMA from Stony Brook University studying with Hagai Shaham. She has attended the Tanglewood Music Center, Aspen Music Festival, Colorado College Music Festival, and Festival Internacional de Inverno de Campos do Jordão in Brazil. She has performed with ensembles such as the American Symphony Orchestra, Knoxville Symphony, Hudson Valley Philharmonic, Princeton Symphony, Northeastern Pennsylvania Philharmonic, New Haven Symphony, American Ballet Theatre Orchestra, and has recently joined Opera Philadelphia.
Robyn is dedicated to community engagement and pedagogy. She founded The Montserrat Music Festival, a summer teaching and performing festival, bringing music education and live chamber music to Montserrat. Her other teaching includes serving as a Violin Faculty at the Sphinx Performance Academy. Robyn also enjoys her position as Violin Teacher at The Chapin School in New York City.

Marka Gustavsson – A dedicated chamber musician, violist Marka Gustavsson spent 3 summers as a Tanglewood Fellow, 91-93. Since that time, Marka has pursued a rich and varied performance life both internationally and in the US. She has been a guest artist at the Bard Music Festival, Mostly Mozart, Vancouver’s Music in the Morning, the Lincoln Center Chamber Music Society, WQXR’s Showcase Concerts, Yale Faculty Artists’ Series, Eastman, and Banff.

As a teacher, Marka Gustavsson has given master classes at Yale, Eastman, Indiana University, Hartt, and Oberlin, and adjudicated competitions at Juilliard, Hartt, Yale, Astral Artists, and Banff. She has taught for several summers at the Yellow Barn YAP in Putney, VT. A graduate of Indiana University, Mannes College, and CUNY, her formative teachers include Joseph Gingold, Mimi Zweig, Felix Galimir, Michele Auclair, Viktor Liberman, Julius Levine, and Daniel Phillips. Ms. Gustavsson is on the faculty at Bard College and Conservatory, where she performs with the Blithewood Ensemble and also serves as Associate Director and Coordinator of Chamber Music.

Ronald Feldman – Two-time winner of the League of American Orchestras’ ASCAP Award for Adventurous Programming of Contemporary Music, Ronald Feldman has achieved critical acclaim for his work as a conductor and cellist. He has appeared as guest conductor with major orchestras, including the London Symphony Orchestra, the Rochester Philharmonic Orchestra, the St. Louis Symphony, and the Quebec Symphony.

He served as assistant to Boston Pops Principal Conductor and composer John Williams from 1989 to 1993.
Seiji Ozawa, Conductor Laureate of the Boston Symphony Orchestra, called Feldman “an outstanding conductor…with a deep musical mind, which is clearly conveyed through his performances.” John Williams regarded Feldman as “a brilliant conductor who displays the best leadership qualities…and an outstandingly high level of musicianship that imbues his conducting style with strength, taste, and imagination.”

Feldman joined the Boston Symphony at the age of 19. He has appeared as a soloist in concerto repertoire from Dvořák to Ligeti. Chamber music affiliations have included performances with the Boston Symphony Chamber Players, Collage New Music, and the Williams Chamber Players. Other performances have included collaborations with violinist Gil Shaham, cellist Yo-Yo Ma, and pianists Emmanuel Ax and Garrick Ohlsson. In 2001, Feldman left the Boston Symphony Orchestra to pursue other musical interests. He was appointed Music Director of Longwood Symphony Orchestra in July 2012. He also serves as Music Director of the Berkshire Symphony Orchestra, a regional orchestra in residence at Williams College. He is Artist in Residence and Lecturer in Music at Williams College. 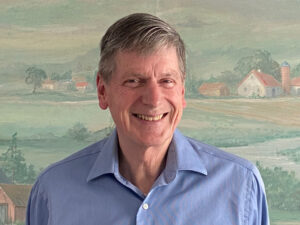 Joel Moerschel – Born in Oak Park, Illinois, Joel Moerschel received his early musical training from Chicago Symphony cellist Nicolai Zedeler and from Karl Fruh, professor of music at the Chicago Musical College. Studies with Ronald Leonard at the Eastman School of Music led to a Bachelor of Music Degree with distinction and a performer’s certificate. In addition to his commitments with the Boston Symphony Orchestra with which he played for 33 years, retiring in 2003, Joel has performed on numerous occasions as a soloist, chamber musician, and contemporary music cellist with Collage New Music, Boston Musica Viva, the Wheaton Trio, the Francesco and Amici string quartets. He also served on the music faculties at Wellesley College and Wheaton College. 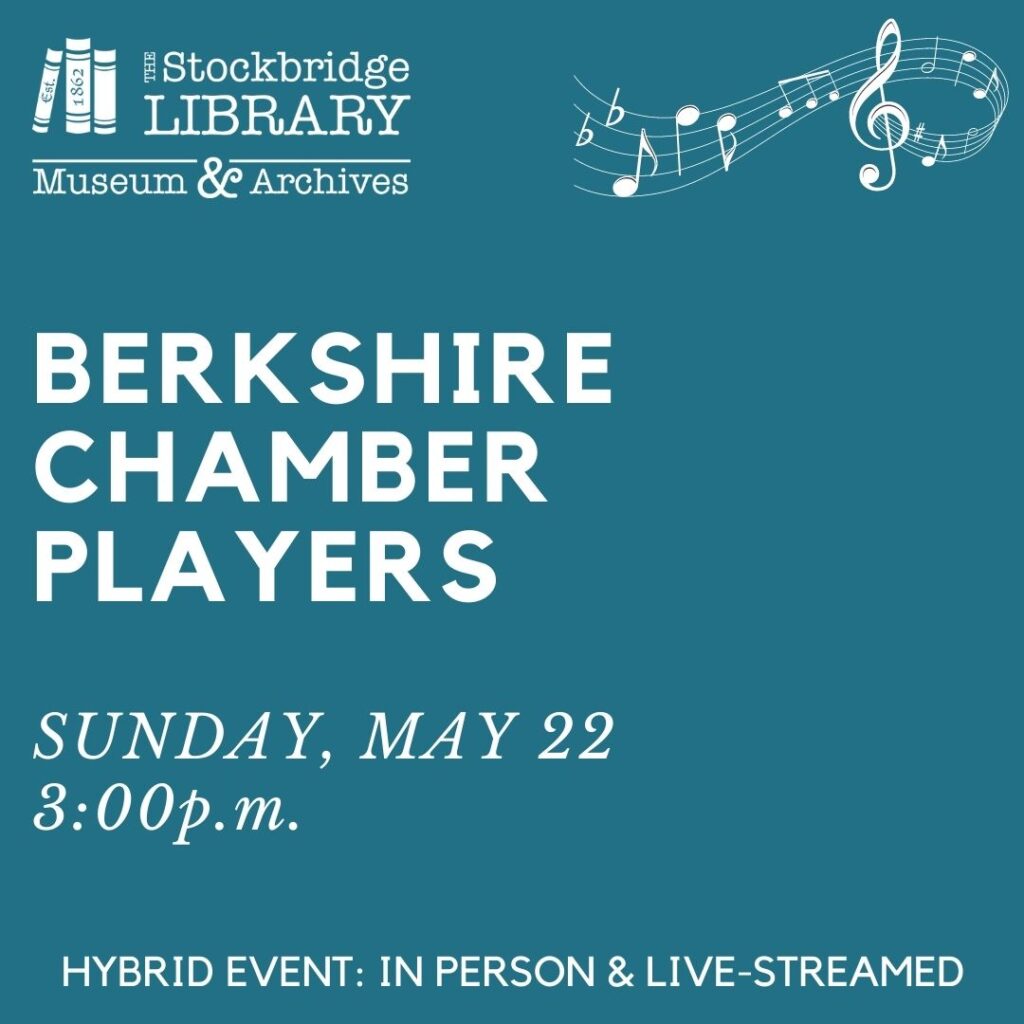