Proof of vaccination and masks are required.

Berkshire county native and lifelong foreign correspondent Jim Brooke will speak on Saturday, November 27, 2021 at 3:00 p.m. on “Ukraine: The Gates of Europe, Besieged by Russia.” Brooke, a Russian speaker, worked as a journalist for eight years in Moscow, first as Bloomberg Bureau Chief, then as the Voice of America correspondent for the former Soviet Union. In September, he completed six years of reporting and living in Kyiv, Ukraine. His experience with the former Soviet Union goes back 30 years to reporting trips he made as a foreign correspondent for The New York Times. He will talk about Ukraine’s chances as a frontline state, facing Kremlin expansionism from the north, south, and east. And, yes, he will field questions on how Hunter Biden was perceived in Kyiv.

Jim Brooke grew up in the Berkshires and attended Berkshire Country Day. After graduating from Yale, he embarked on a lifelong career as a foreign correspondent. Reporting for 24 years for The New York Times, he was based in West Africa, Brazil, Denver, Canada, and Japan. After taking a buyout from the Times in 2006, he was, successively, Bloomberg bureau chief in Moscow, then Voice of America TV/Radio correspondent for the former Soviet Union. After eight years in Russia, he moved to Phnom Penh to run a newspaper, then to Kyiv Ukraine, where he founded and edits the Ukraine Business News. After six years in Kyiv, Jim recently moved back to Lenox with his family.

This event will take place live in the Bement Room at the Stockbridge Library. Proof of vaccination and masks are required. 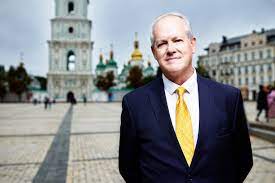